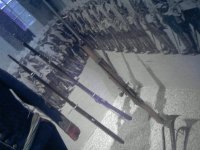 yo no lo veo bien
P


The Best .45 Auto: The Obregon Auto Pistol
by Garry James | December 7, 2011
44
41
When one thinks of countries known for innovative firearms design, Mexico is not one that immediately comes to mind. But at least two guns give that country a real leg-up in the cleverness department — an influential pre-World War I semi-automatic rifle designed by General Manuel Mondragon (which was issued to Mexican troops in 1908, making it the first semi-auto rifle to ever be adopted by any army), and the subject of this month’s Classic Test, the Obregon auto pistol.

Timing is incredibly important in just about every human endeavor, especially in the firearms business, as Mexican mechanical engineer Alejandro Obregon discovered much to his disadvantage. I was unable to ferret out much about Obregon’s other work, and his sole claim to fame seems to rest upon his interesting .45 ACP (11.43mm) autoloader.

We do know that Obregon patented his pistol in Mexico in 1934, and in the U.S. in 1938. It is surmised that between approximately 1934-1938, some 800 to 1,000 were made by Fabrica de Armas Mexico in Mexico City. To be fair, these figures are somewhat conjectural and it is possible that several thousand autos were actually produced. Still, the low rate of survival — especially with guns in good condition — seems to point to limited manufacture.

While it is safe to assume Obregon hoped to sell his pistol to the Mexican military, alas, such was not the case — an understandable decision during peacetime and the depths of the Depression. It did have some vogue among a smattering of Mexican officers and police officials who purchased them privately, but lucrative government contracts were just not forthcoming. Production ceased after only two or three years and the gun lapsed into obscurity.

Though the slide is wider and more rounded at the top, at first glance the Obregon looks very much like the standard 1911A1 Government Model — and from the triggerguard back, that’s pretty much what it is. Internally, the trigger mechanism, extended beavertail grip safety and arched mainspring housing, not to mention the seven-round magazine (which is interchangeable with that of the 1911), are almost identical to the 1911’s. The Obregon’s mag release is very close, but it does have a small dogleg on the magazine catch which fits into a notch on the trigger strut to lock the trigger when the magazine is not inserted in the pistol. Unlike many other magazine safeties, this one at least can be overridden by simply pushing in on the mag release button. The hammer retains the broad spur of the 1911 — a feature which I’ve always preferred over the later, more narrow variation. Sights are standard military, with a fixed front semi-circular blade and drift adjustable square-notch rear with a low matte rib running between them. Finish was blue and grips were checkered walnut.


Comparing the internals of the Obregon (top) with those of the 1911A1 (bottom), it is readily apparent that the lockup systems of the two guns are entirely different.
Now the real innovations. One of the main criticisms leveled at the Browning design is the swinging link feature that has been found to fracture after extended firing — it is in effect probably the gun’s weakest link (sorry, couldn’t help it). The Obregon employs an entirely different locking system. It’s still a short recoil setup, but instead of the dropping barrel of the 1911 the gun has a rotating barrel lockup similar to that of the Austro-Hungarian Model 1912 Steyr, among others. This is accomplished by a barrel with a diagonal stud at its base which fits into a frame-mounted collar which has a corresponding slot milled into its topside. The collar slips onto an attenuated projection at the bottom of the frame and is held in place by the slide stop/safety post. As the slide moved rearward, the stud/slot turns the barrel slightly clockwise to free three locking lugs from their recesses in the slide. When the slide moves forward, the barrel reassumes its original locked position, readying it for firing.

The slide stop and safety are one piece—an economical arrangement that does away with the separate controls of the Government Model, providing for ease of manufacture and disassembly and less parts to go wrong. There is only one thumb catch, sited in the 1911’s safety position, and two slide notches one for safe and the other for hold-open. The slide does remain to the rear after the last shot.

Unlike the 1911, with its long recoil spring and spring plug which can pop out of the gun during fieldstrip like one of those joke snakes-in-the-can-of-peanuts, the Obregon’s recoil spring is held captive on a spring guide, and upon disassembly is easily plucked from the gun.

When one disassembles the gun, he can see that virtually all parts are serial numbered — including the magazine. The pistol exhibits a high quality of workmanship, though I did notice the collar notch appeared to be milled a little too deeply and there was a small 3/8-inch slit where it broke through to the central cavity. As the gun shows a considerable amount of use (as do most Mexican guns, it seems) this slight blip does not seem to have affected the piece’s serviceability.

I have to admit the Obregon has a lot of things going for it. I especially liked the one-stop-shop manual safety/slide hold-open arrangement, and could see no downside to the rotating barrel arrangement. While it would take much more testing with a better condition gun than mine to be sure, it’s quite possible it might be on a par with, or even better than, the 1911. It’s just too bad it never had a wider audience. Bottom line: es un pistola muy grande – either south or north of the border. 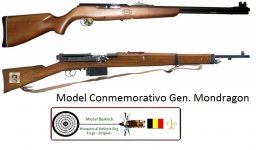